I have finally moved to http://giaguara.wordpress.com.

I will keep in touch with the blogs and people I still care about in LJ.

All comments that are made by others than friends are subject to my approval in this blog before they appear anywhere.
This is due to the recent mountain of spam in this site.
I have a zero tolerance to unrelated comments.
Thank you, and have a nice day.

I'm getting really tired about the constant spam hitting livejournal. At least my accounts.
So, I've changed the settings to pre-screening EACH comment that isn't made by anyone in my friends list. This isn't exactly the way I like it, and I doubt if it'll actually make any effect. Let's see.
Really. I don't want to see spam comments daily.

Bunch of my friends have moved to other blogging platforms. I've tried a few others, but I'm not exactly happy with any of them.
If you know of any good ones, please suggest. (And if you're not in my friends list, keep the comment to topic or you'll be red-flagged).

I like the social aspect of easy RSS-ing some friends content. That's been one of the main reasons for staying here.
I need good tags.
Good customization.
Good control for comments (obviously).
Integration where needed (to flickr, youtube, vimeo etc).
I want the place to inspire me to write more.
Currently I'm in the "internal mode", being less social and more introvert than I'd like to. So a fresh writing platform would be nice to have.

bouhaki
Open book test
Based on the books on your bookshelf, what conclusions would people draw about you?
Reply 1596

I don't make many conclusions, just describe the shelves.

She's doing some bookcrossing. (see labels and stickers on spines)
She likes thrillers like Robert Ludlum.
She likes detectives (Camilleri, Connelly, F. Kellerman, McCall Smith etc), mysteries, and cat books.
And there are odd other things among the above: a book about the Algerian pirates in Baltimore, Ireland, vintage spy stories, audiobooks, an airport manual from 1970, "Computers at work" from 1970, books about chocolate and about servers...

The bookshelf next to it has more scifi stuff but that's all his stuff.

Among the non-book items in the bookshelf right now: a bottle of Kirkland vanilla essence for cookin, a MacIntosh scented candle in a jar, a Furminator (the cats love it), a lip balm, a keyboard, hooks from IKEA, glue, basil seeds, a repaired vintage piece of jewelry.

The thin bookcase in living room has only stuff on queue and will host in winter coffee plants.
IKEA Expedit shelf is mostly occupied by the cats.
The bathroom shelf has "bathroom literature": Texas short stories, quotes, Doonesbury stuff, tourist guides, catalogs, travel magazines.
The shelf above the bed is for figuring what to read next.
There are books in 7 languages in the house (or 6 and 1-2 dialects).

If that would mean just continuing to live in the current incarnation past the average expiry date, no. Bodies work less when you age, so it would be totally different to be forever 20 or 30 than to live forever but age. Instead of being still 20, you'd be 70, 80, 90, 100, 110 and so on, forever...

Money ain’t a thing
If money were no object, what technology big or small would you buy tomorrow?
Reply 254

A Mac Mini Server. I want one. And I will get one hopefully by Christmas.

After having mostly laptops since 1999, that one feels like the first desktop I'll want to use. I need the server part, and when I need to run somewhere outside the house, it can be carried with. Oh, and it's 100-240 V which makes it, like laptops, deals with the electricity everywhere. 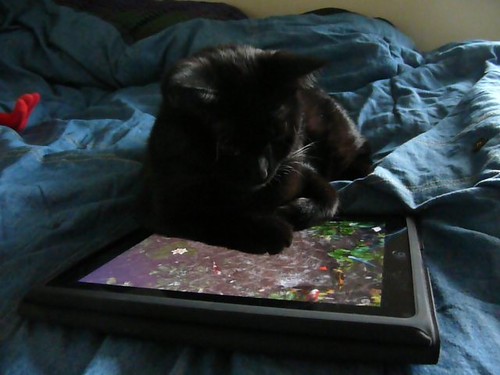 Yep, that is 'the girl', Ellie. Using the her iPad.

The tenth time's the charm
What movie have you seen the most times in your life? How many times have you seen it? Will you ever grow tired of it?
Reply 1028

I would probably have to go ahead with Office Space, yeah...

Even though probably I've seen some of the older James Bond flicks more often than that.

Long time no update... sometimes life needs a bit more privacy, or there is less to elaborate. Nothing major's been happening, and I still can't do elaborate descriptions about feelings.
Weather will hit 100 F mark in the next few days. That will be time spent at pool, and with some good reads.

I got some new toys recently: an ice cream maker (I got the green one as they didn't have the yellow ones in store), some new ikea shelves and gadgets, a few books... on the list of next ikea purchases will be this table set (the first table or dining set that I actually like enough to buy. And I'm not big on 60s or 70s styles) and one of these bookshelves (in white, like the billys and lacks that are already in use for books etc here).

Anyway. What prompted for a proper update was the increasing need to rant.
Not about too personal stuff (at least for now), but rather of the annoyances of the external kind. While I try to keep in shape by swimming enough daily, the pool is an excellent place for observing these annoyances.

What really annoys me at swimming pools would include e.g.

- People bringing their children and NOT supervising them. C'mon, it's a residential pool. If you bring your kids, they are your resposibility. It's very clearly in the pool rules. No one should do your parenting for you

- Screaming people. This usually includes the rather younger kind, but is not limited to them. I can't stand people of any age screaming or making loud noise. Most loud 'things' at pool seem to be under 5, but teenagers occasionally annoy for the same reason. For them I just don't buy the excuse of hormonal peaks causing the loudness and stupidity - I've never particularly been in good relationships with even the hormones my body produces, and I never had the screaming age at my teens. Just keep... and keep them quiet, thanks

- People talking on phones... and having a "private" discussion. Hey, I want to either swim or read at the pool. The last thing I'm interested in (ok, after listening to anyone's offspring's doing a concert with their vocal chords) is listening to anyone's hours long "private" phone discussion. Switch the damn thing off! Or go inside or somewhere else to finish it off

- Smoking. Wtf? Why does anyone have to smoke at pool? When the temperatures in the sun hit 90s or 100s (over 30 C for the imperially impaired :p), any piece of ever has-been-a-ciggie stinks. Get them away

- Inappropriate swimwear. This irks me a lot for some reason. I guess for some albinos or with a skin that should be kept away from daylight for medial reasons (being a vampire fan doesn't count as a medial reason) a t-shirt and shorts might be seen as appropriate... but then why not go swim after the sun doesn't hit the pool anymore? Before 8 AM or after 6 PM. Pick your time. There's also some lady who seems to be um, 'ethnic' and I could imagine the 'ethnic' reasons would sometimes be used for using a more conservative swimwear, but that's just BS. While in Rome, do as the Romans do. While in Texas, wear Texas-appropriate swimwear. If your Gods allow you to swim, then the same good better allow you to wear appropriate swimwear to respect the local customs wherever you live. If he/she/it doesn't allow it, cut it or change your world views. Oh, and for the other category that always seems to swim in inappropriate swimwear, that is t-shirts etc = the fat teenagers: wearing a t-shirt etc makes you look just fatter.
Why is it so hard for some people to wear actual swimwear if they go swimming? Get your completely private pool if you don't want to wear what's generally seen as appropriate, but keep the long sleeved sports wear and t-shirts out of the pool

- People blocking the pool. Add 10 or 20 people doing nothing but standing in the pool, not moving (except the arm and that for drinking the beer WHILE at pool) and how on earth are you supposed to swim there? Pool is for swimming. GTFO while you drink your beer. And GTFO for the ones who swim in a way that makes it impossible to swim in the longer direction of the pool. I get angry when I have to watch carefully where to swim because of things or people of various ages swimming in inappropriate and completely random patterned directions. Those patterns would be better in a kid pool, so while there is none in the smaller area pools here, I'd gladly kick all those of the age where they wear diapers (at pool? That's more gross than bringing your dogs to the pool) and/or cannot swim in a direction appropriate for the pool use and without interrupting other people's swim patterns, to the junior pool at the main pools. Which is like less than 3 minutes walk away with a shortcut.

Overall I've been surprised many times in the past months when I've seen well behaved children. I guess after a number of years of Ireland they seem quite rare.

I noticed some FB updates of some BC friends going to Amsterdam that they were having some major delays. The flight delays due to the volcanic activity in Iceland, and it turns out it is covered pretty well on the European medias (of which BBC kind of should be most neutral).

US medias over here? I don't feel like turning the TV on (it just feels so wrong during the day).
Newspapers - the only ones on analog paper I occasionally get would be The Onion and even that maybe once a week.
So, my usual net coverage for news would have it covered in European medias (UK, Italian etc. Scandinavian and mid-European for sure - when most air space is completely closed). New York Times has it on their front page now. Austin Statesman doesn't have a word about it etc. Fox News is usually a joke but at least they have something (linked from their first page).

Basically, air traffic is shut down for most North and Central Europe. Even for the royals.

Old main medias are one thing, but with 'web 2.0' (horrible term, can we just preview the 2.5 or 3.0?) it's all about the newer medias and people creating the content themselves.
I thought I had a good part of my friends in Europe - not many seem affected. Most don't travel every day, but I wasn't expecting a total quietness either (in Facebook, Twitter etc).
Of those in US, I don't think I've seen a thing...
The usual net hangabouts don't have anything about it either. If those ashes were covering California, I'm sure twitter and all boingboings, neatoramas and whatnot would be tweeted to death about it.

As the volcano keeps erupting and spitting out lava and ashes, I can just imagine the long term effects of it. Total chaos around Europe for cancelled flights is in the short term category (better be safe than risk thousands of flights and millions of people on the unsafe sky conditions). Climate for the region is definitely a long term one. Ireland and many other countries in Europe had severe hunger in 1860s, for a few years after the volcanic activity of, again, Icelandic volcanoes. Time will show how long the immediate activity and the aftereffects will last this time. Years? To some effect, I'm sure.

I'm happy to not have to fly these days.
Collapse